As I have said before my Grandmother make the BEST EVER Peach Cobbler. What makes her cobbler recipe so delicious, besides the fresh Parker County Peaches, are her dumplings and delicious flakey crust. I love this cobbler so much that for a while now I’ve been thinking about turning this sweet desert into something savory. Like any good Texas girl I adore chicken and dumplings’ but I also love the top crust on a chicken potpie, so I took these two classic dishes and merged them together and created Chicken Cobbler.

I know it sounds weird but trust me…. It WAS DELICIOUS! First I took my Grandmothers cobbler crust and dumplings recipe and added a little black pepper and some freshly grated extra sharp white cheddar cheese.

Then in my beloved cast iron skillet (Cast Iron = FLAVOR) I browned up some chicken thighs, caramelized onions, and then made a delicious pan sauce with one of my favorite ingredients, cognac. To me the cognac enhances all the flavors in the sauce and adds a little bit of luxury to a rather rustic dish. Next time you make a gravy or pan sauce add in a splash of cognac and I promise you will have an award winning sauce that is lick the pan clean good! Hey what happens in the kitchen stays in the kitchen right?

Anyways I hope you enjoy this little creation of mine and please let me know what you think.

For the Curst and Dumplings

2/3 Cup Shorting (such as Crisco), cut into small pieces

Add the flour, salt, black pepper and cheese to a large mixing bowl and toss to combine. Cut the shortening into the flour, cheese salt and pepper mixture with a pastry cutter until the mixture looks like course cornmeal. Slowly add in the ice water and form into a ball with your hands. Divide the dough in half and wrap in plastic wrap then place in the refrigerator to rest.

Next the Chicken Filling and the Sauce:

A pinch of Cayenne Pepper

Salt and Pepper to Taste

Heat a large cast iron skillet (or Dutch Oven) over high heat. Liberally sprinkle the chicken thighs with salt and black pepper. Melt a Tablespoon of butter in the skillet and brown the chicken thighs, repeat in small batches. After the chicken has browned transfer to a plate and set to the side. 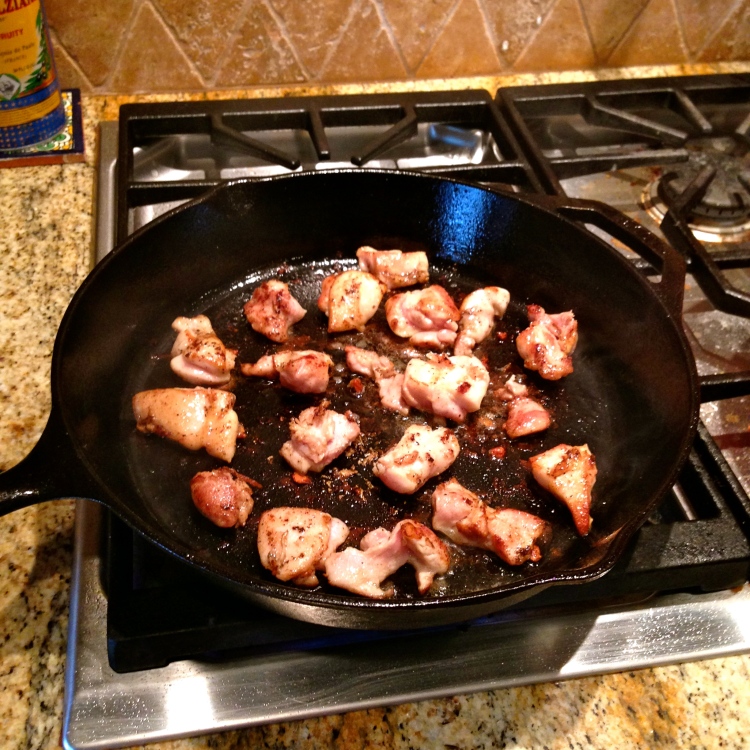 Make a well in the middle of the skillet and melt 3 Tablespoons of butter then whisk in the 3 tablespoons of flour. Combine the butter and flour with the caramelized onion and cook for 2 minutes or until light brown in color. Then slowly whisk in the ½ cup of milk and ½ cup of chicken stock, continue to constantly whisk until thicken.

Once the mixture has thickened slowly whisk in the remaining ¾ cup of chicken stock and the ¼ cup of Cognac. Add in the thyme, cayenne pepper and salt and pepper to taste. Bring the sauce up to a gentle boil.

While the sauce is simmering, roll out half the dough into a thin sheet on a well-floured surface. Cut the dough into small dumplings and drop them into the boiling sauce one at a time. Add in the browned chicken back to the pot and reduce the heat to a simmer.  (If you didn’t want to mess with the top crust you could just simmer this for 15 more minutes then eat just the chicken and dumplings… But the cheesy crust is SO good.)

Roll out the top crust to fit inside the baking dish (it doesn’t have to be perfect cobbler is an ol’ chuck wagon dish after all). Brush the top crust with a little egg wash and cut a few vents in the dough.

Pour the chicken and dumpling mixture into a greased 9×13 baking dish and place the top crust over the cobbler. Bake at 350 degrees for 40-45 minutes until golden brown. 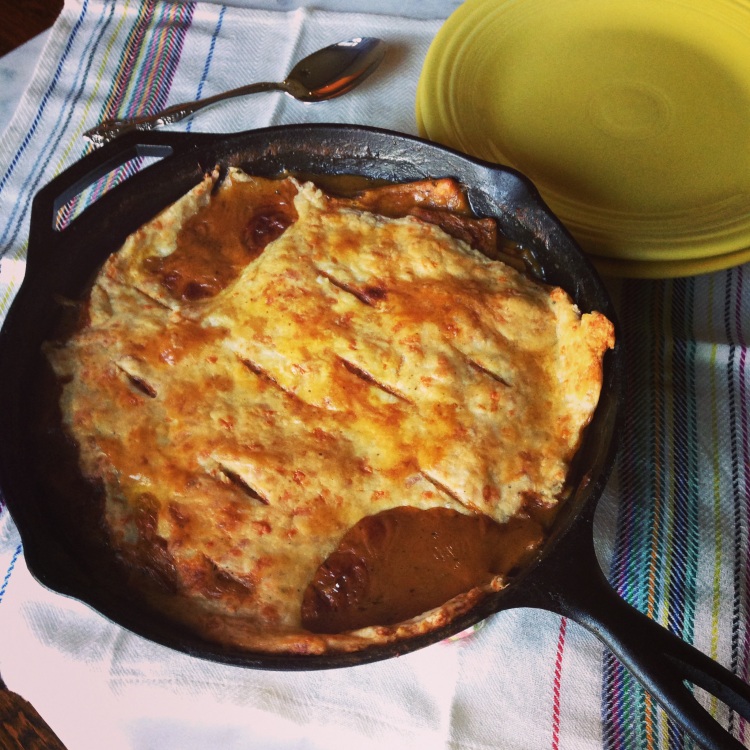 3 thoughts on “What Happens When Chicken Pot-Pie Meets Chicken and Dumplings?”